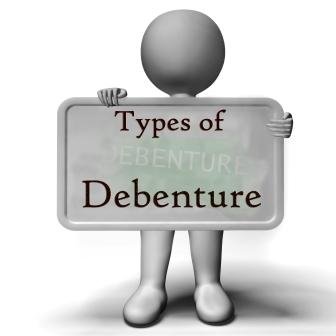 When the debentures are converted to equity, the company will not have to repay the debt back. The share holders will benefit when converted from debt to equity as they would have enjoyed the fruits of interest receipts and now they will gain right in the share holding of the company and will enjoy voting rights and dividend payments. The conversion terms are pre decided and are announced generally at the time of issuance of these debentures.

Debentures that entitles the holder of it, a right to exercise an option of converting debentures into stock at the time of scheme of conversion announced by the issuer.

These debentures are the securities that have to be compulsorily converted into stock at the announcement of conversion scheme proposed by the company. The holder of these debentures doesn’t have an option.

These debentures are the securities that give an option to the holder at the time of conversion to hold them partly as debentures and convert partly into stock as per the scheme announced by the company.

These debentures are the securities that stay as such till they are matured. They hold its position as debentures until they are redeemed by the issuer either after completion of its life or on the occasion of liquidation or winding up. They cannot be converted into any other securities during its entire lifetime.

These debentures are issued with a fixed period of time generally lasting between 2 to 15 years. These debentures fetch interest to the holders during its life time and when redeemed, the principal amount is paid back. Redemption can be done through annual withdrawals or by purchasing in the open market.

Debentures that are secured by a mortgage of the whole or part of the assets of the company are called mortgage debentures or secured debentures. In other words, these debenture holders have a right on the assets mortgaged to recover their principal amount. The secured debentures are generally issued with a term not exceeding 10 years or 30 years as per the Rule-18 of the Companies (Share capital and Debentures) Rules, 2014.

These debentures, also called as Simple Debentures don’t carry any charge or security on the assets of the company. The holders of these debentures have no right to attach particular property by way of security as to repayment of their principal or interest.

There is no restriction on the company as to issue of different types of debentures.

Unregistered debentures also called bearer debentures are the debentures that can be transferred to any person by mere delivery. The interest and principal are paid to the person who produces the coupons. This is similar like share warrant where the holder of it is entitled to repaid the principal or interest.

Fixed debentures are the debentures that carry fixed charge on the issuer’s assets for repayment. The rate of interest or coupon payment is fixed i.e Static and is paid at regular intervals. Fixed Charge is defined as a lien or mortgage created over specific and identifiable fixed assets like land & building, plant & machinery, intangibles i.e. trademark, goodwill, copyright, patent and so on against the loan. The charge covers all those assets that are not sold by the company normally. It is created to secure the repayment of the debt.This charge will be paid by the company till the debentures are repaid.  These debentures generally impose additional restrictions on the assets on which charge is created to ensure the fixed repayment schedule or for security of lenders. The charge is generally created on the fixed assets or Non-current assets of the company.

Floating debentures are the debentures that have a rate of interest that is subject to change i.e dynamic, based on the value or quantity of the underlying asset. Floating charge is compulsory to be registered and is generally made on current assets of the company.The lien or mortgage which is not particular to any asset of the company is known as Floating Charge. The charge is dynamic in nature in which the quantity and value of asset changes periodically. It is used as a mechanism to secure the repayment of a loan. It covers the assets like stock, debtors, vehicles not covered under fixed charge and so on. The business can use the underlying asset in its normal course. The important characteristic of these debentures is that, when the company goes into liquidation, the floating charge changes (Crystalizes) into fixed charge and the lender gets priority to be able to withdraw against the asset. These debentures are an effective way of raising capital using their inventories and for companies which doesn’t have huge fixed asset base. Crystallization is the process where the floating charge is converted to fixed charge. This crystallization normally occurs when the company is about to get wounded up or there exist grounds to question the existence of company ion future or when the court appoints the official receiver or the lender has taken the possession of the asset as a measure to secure the lending in the case where the company has made a default in payment.

Zero coupon debentures are also called Deep discount debentures. These are issued at a lower price very less than the face value and are redeemed at face value. These don’t give or fetch any interest or coupon to the holders of these debentures. The only return the holders gain by investing in these is the sum they receive in the form of capital appreciation i.e the difference between the issue price (discounted price) and the redeemed price.

Specific debentures are the debentures that are issued with a specific rate of interest or coupon payment.

Often, these debenture holders are prone to suffer loss at the time of repayment as they are the ranked last to be repaid. These debentures carry huge risk and often require huge interest rate for the company to sell these to the investors. These debentures could sometimes also be issued with an option of conversion or an option to exchange with the common stock so that the expected interest rates of the investors could be reduced and makes the company sell easily.

Debentures can be classified on the following heads,