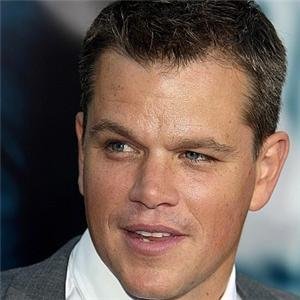 Birth: Born on 8 October 1970 in Cambridge part of the greater Boston metropolitan area, Massachusetts.  At present Matt is 46 years old.

Training: Matt spent his entire schooling at schools in Cambridge and then continued his studies at Harvard University in the same locality, majoring in English. Due to pending film work he did not complete his degree.

Personal Life: Matt met his future wife Luciana Barroso, a bartender in 2005 and the couple married in the same year.  They have three daughters and Matt also has a stepdaughter from Luciana’s previous marriage.

Activities: Matt is a consistent draw at the box-office as an actor, has won an Oscar for best movie screenplay and is also active as a producer.

The title of this article is a parody of the 1999 film “The Talented Mr. Ripley” in which Matt played a devious and unsavory character with considerable aplomb.  With his clean-cut image, boyish good looks, and charming personality his acting set him in complete contrast to his public impression and exhibited his talent for cunningly playing an unlikeable figure.  This display of acting going against the grain of his public image was repeated in “The Departed” and “The Informant”. But Damon also portrayed heroic figures with similar success in The Jason Bourne movies series, “The Martian” and others bringing great entertainment to his army of followers in both types of roles.

An almost invisible Matt appeared for the first time in the popular Julia Roberts movie “Mystic Pizza” almost not registering a blip on the Hollywood radar.  A few years later he and his best friend since the age of 10, Ben Affleck wrote the screenplay for the movie “Good Will Hunting” earning both of them an Oscar for best original screenplay and a nomination in the category of best lead male actor for Matt. Thus, the scene was set for a great and illustrious career that is still developing and evolving with the promise of more terrific things to come.

Matt Damon was born as Matthew Damon in Cambridge Massachusetts on October 8, 1970.  He is the second son of Kent Damon a stockbroker and Nancy Damon an Education Professor.  Matt has an older brother Kyle who is a well-known sculptor and artist.

Matt’s parents divorced when he was two years old and the mother and two sons stayed in Cambridge for the rest of Matt’s school career.  At the age of 10, he first met actor Ben Affleck and the two boyhood friends went on to became world famous movie stars and remain close friends.  Matt has a good relationship with his family including his brother although it is reported that he felt that his mother’s attitude towards child rearing described as: “by the book” was somewhat stifling at times.

Matt attended school in Cambridge including the Cambridge Rindge and Latin School, a public high school also attended by his best friend Ben Affleck.  The two of them did everything together, jointly developing an interest in acting when they performed in school plays.  After school Matt registered at the Harvard University, also in Cambridge, Boston majoring in English. During this time Matt had small roles in movies but when the chance came along in 1993 to act in the upcoming “Geronimo: An American Legend”, he felt that the opportunity was too alluring to pass.  He consequently kicked up his studies to take on the role which proved to be less of a success at the box office than expected although an excellent movie by any standard. The late Roger Ebert called it “a film of great beauty and considerable intelligence” https://www.rogerebert.com/reviews/geronimo-1993.  Matt would have to wait for a further couple of years before his acting career would take fire and lead to fame, fortune, and happiness.

There are no reports of Matt having long time affairs with celebrities of otherwise.  While filming in Miami in 2003 Damon met his future wife, a bartender at the time by the name of Luciana Barroso.  It was instant love and marriage followed in 2005 with Matt already 35 years old.  Luciana had a daughter, Alexia from a previous marriage whom Matt adopted. Three further daughters were born to the couple namely, Isabella, Gia, and Stella.  As Matt himself has been quoted to say: “that is a lot of estrogen to cope with”

Matt is well aware of his public image as a nice guy. This fact elicited the following commentary from Matt: “I don’t hold myself to some higher standard of behavior.  You don’t have to do a lot to be seen as nice.  I guess some of these people must be such rampant pricks that people are amazed when you say hello.  I don’t know why people like me, and I don’t know if I want to know. That might be the kiss of death.  I’d rather people not know a lot about me and go see the movies.”

Damon is involved in a number of projects on the humanitarian side of things including fighting AIDs, bringing water to development projects in the Sahara, and the prevention of human atrocities.  He is also a long-time friend of both Brad Pitt and George Clooney.

By his own admission, Matt says he becomes teary eyed with little encouragement. He prefers to be private and avoids big Hollywood events.  In the same vein, the promotion of his film work is not one of his favorite activities.

After the Geronimo pic, Matt Damon next impressed in “Courage Under Fire”. His career literally exploded with the release of the highly acclaimed “Goodwill Hunting” The story was first developed by Matt while he was still studying but later he and Ben Affleck worked together on the final product about a young janitor who is also a genius in mathematics.  The two writers were acknowledged with the Academy Award for the best original screenplay and in addition, Matt received a nomination for best male actor in a leading role.  A further accolade was the Oscar received by Robin Williams for best male actor in a supporting role for the same flick.  Suddenly the two friends were on everybody’s lips and they both remain A-listers of note on the movie scene.  Matt was nominated further for Oscars for his performances in “Invictus”, and “The Martian”, and controversially missed out on the Oscar for best picture as co-producer for “Manchester by the Sea”. Now regarded as royalty in Hollywood, Matt has appeared in 56 feature films with three more waiting for release. He has a number of projects in development.

Looking back at the many memorable films starring Matt, visions of his outings as Jason Bourne, the Oceans trilogy, “The Martian”, “Elysium”, “The Adjustment Bureau”, “True Grit”, and “The Departed”, all flood the mind as truly great movies. At 47 years old Matt seems destined to bring his fans many more of these memory making pictures.

Spirit: Stallion of the Cimarron 2002